Crawfish - an Excellent Source of Forage 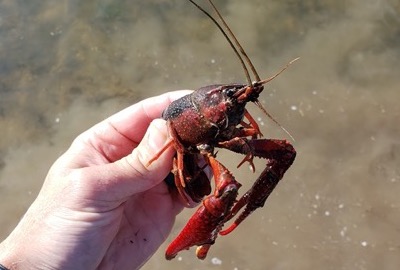 Crawdads provide an additional forage resource that is high in both protein and fat content that will help your predator fish gain those extra pounds. It will also reduce the strain those predators are exerting on your other species in the forage population, allowing then a period of growth and rest to help sustain their population.

Crawdads, A Tasty Treat for Bass and Man Alike

Anyone who enjoys eating crawfish knows just how seasonal the tendencies of this species are. Peak activity occurs in early spring and begins to dwindle somewhere around May depending on mother nature ... timing is very important. This limit on their availability constricts the stocking window to primarily spring only, unless you can somehow get your hands on some wild caught crawfish that a buddy has trapped. 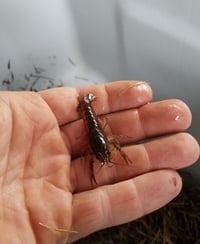 Like I said, springtime stocking is the industry norm for aquacultured Crawfish to ensure a consistent catch of a desirable size. In a natural setting however, these “bugs” can spawn throughout the year. Their spawning habits have been reformed from decades of adaptation to the seasonal rise and fall of water levels in creeks and ponds. The peak spawning seasons occur in the spring, then once again in the fall. An interesting fact is that Crawfish mate in open water then the female returns to her burrow to release her eggs and fertilize them. Once her eggs are fertilized, they will be attached to the swimmerets on the underside of her tail. On average, a female can lay 200- 300 per spawning event. These eggs take around 3 weeks to hatch depending on the ambient temperature in the burrow. After the newly hatched Crawfish have gone through multiple molts (the shedding of their exoskeleton) and are able to survive on their own, they all must wait in their burrow for the water level to rise or a rain event to soften the cap on their burrow. Once in the water, its everyone for themselves to grow and reproduce, providing an excellent forage source for your fishery. But their territorial behavior makes keeping Crawfish in tanks waiting to be transported nearly impossible.

Why Crawdads Are Worth Stocking as Forage

Now that we are done with science class, here are the key points of why Crawdads are important to your fishery. Because of their relatively high parental care after the initial hatch, they have a high survivability.  This, coupled with their ability to spawn throughout the year, is a key aspects in being able to sustain a population within your fishery. Luckily, Crawfish naturally occur near most waterways in the south so there is a good chance that you could already have a small population already existing in your pond. On the other hand, if you dug your pond in a field or the pond you created is too big for the natural population to thrive, you would most definitely benefit from stocking Crawfish. These crustaceans provide an additional forage resource that is high in both protein and fat content that will help your predator fish gain those extra pounds. It will also reduce the strain those predators are exerting on your other species in the forage population, allowing them a period of growth and rest to help sustain their population.

Get the Most from Stocking Crawdads

Whether it is an initial or supplemental stocking of Crawfish into your pond, there are a few key steps to take to ensure they aren’t eaten before they can become established.

When introduced properly, this species can help to improve the overall health of your fishery and add extra pounds on that trophy you haven’t caught yet. If you have any other questions on how or why to stock Crawfish in your fishery feel free to contact me anytime at garrett@pondking.com. See y’all later.

The Pros and Cons of Feed Training Bass