How to Handle Your Catch

Whether you are a tournament angler, or weekend-warrior, or a novice, learning how to handle your catch can prevent injury to both you and your catch - ensuring that everyone remains healthy to fish another day!

Knowing how to properly handle fish is an essential skill for any angler to learn. Fish handling is a particularly important skill if you're a tournament angler, or really anyone who practices catch & release, because safe handling practices result in a healthier fish going back into the water. But these tips aren't just about keeping the fish healthy - these tips will help increase safety for you when handling certain species with sharp fins, rays, or teeth because, let's face it, getting hurt by a fish can put a real damper on an otherwise good day.

Mistakes to Avoid when Handling Fish

Some of the most common mistakes I see people make when handling fish include bending their lower jaw at an unnatural angle, palming the spiny dorsal, and handling fish with dry hands or on a dry carpet. Almost everyone is guilty of these at one time or another, often because they don't know the effect of these practices on the fish. I'm going to share some safe handling tips for you to use in the future to keep you and the fish in better condition.

Use Two Hands to Support the Fish for Photos

With many gamefish, lipping the fish is often a safe way to handle and restrain the fish while removing the hook. However, it should be done in a fashion where the lower jaw is not bent down so much that the fish's full body weight is only supported by the jaw. When you stress the jaw in this fashion, you may dislocate and or break the fishes' jaw, leaving it in a reduced state of fitness and making it more difficult for the fish to consume prey. To keep the fish in prime condition, when lipping the fish, keep the lower jaw in line with the fish's belly so that it is not being torqued out of place. Even better, when holding the fish out for a picture, use two hands, one holding firmly on the lower lip and the other supporting the fish's belly or body weight (Figure 1). This will remove any unnatural torque on the jaw and diminish the risk of injury to the fish.

Wet Your Hands and Other Surfaces

Another essential item, especially for tournament anglers and weight masters, is to make sure you are handling the fish with wet hands or on a wet surface. This reduces the amount of the fish's slime coat that is likely to be removed while handling. Not allowing the fish to flop on the carpet of your boat, wetting your bump board/rulers, and wetting the weigh-in bag before the start of weigh-in are simple ways to improve the fish's condition. Without these precautions, you're removing a fish's slime coating and increasing their susceptibility to parasites and disease. Fish are already naturally stressed throughout the process of being caught and transported to weigh-in, which increases their susceptibility to disease, so it is crucial to help them maintain their natural barrier.

Something I believe almost everyone has done or has happened to them at some point or another is getting finned by a fish. Whether it is the spiny dorsal on a sunfish, such as a bluegill, or by a pectoral and dorsal spine on a catfish, chances are you know the feeling. These fish use these as a defense mechanism for predators. Sunfish often use that spiny dorsal throughout their life to make it difficult for a predator to swallow them. This is often why species like bass have adapted to eating larger forage head first to prevent those dorsal spines from getting lodged in their throats or mouths. Species such as muskie have taken a liking to soft rayed fishes like shad and cisco instead of sunfish.

Catfish use their dorsal and pectoral spines in a very similar way as the bluegill to prevent being eaten. However, as catfish get large enough to avoid any predation, their skin begins to overgrow the points of their spines. When handling spiny rayed fishes that you are unable to "lip," it is always best to slide your hand down from their head to their back when you grab them to make sure you lay their dorsal back, so the spines are not going to be stuck in your hand. With catfish, my favorite way to handle them is by grabbing them from the underside of the body by the pectoral fins, holding one pectoral spine between your index and middle fingers, and sliding your hand up, so it is pressed behind the free pectoral spine. I have complete control of where they go and cannot be thrown into your hand (Figure 2). With larger fish, you may also need to grab their tail anterior (in front) to their caudal fin (tail fin) to maintain control (Figure 3). If you happen to get stuck by a fish, it is common for the site to swell and be sore for a few days. Make sure to keep it clean and covered to prevent infection. 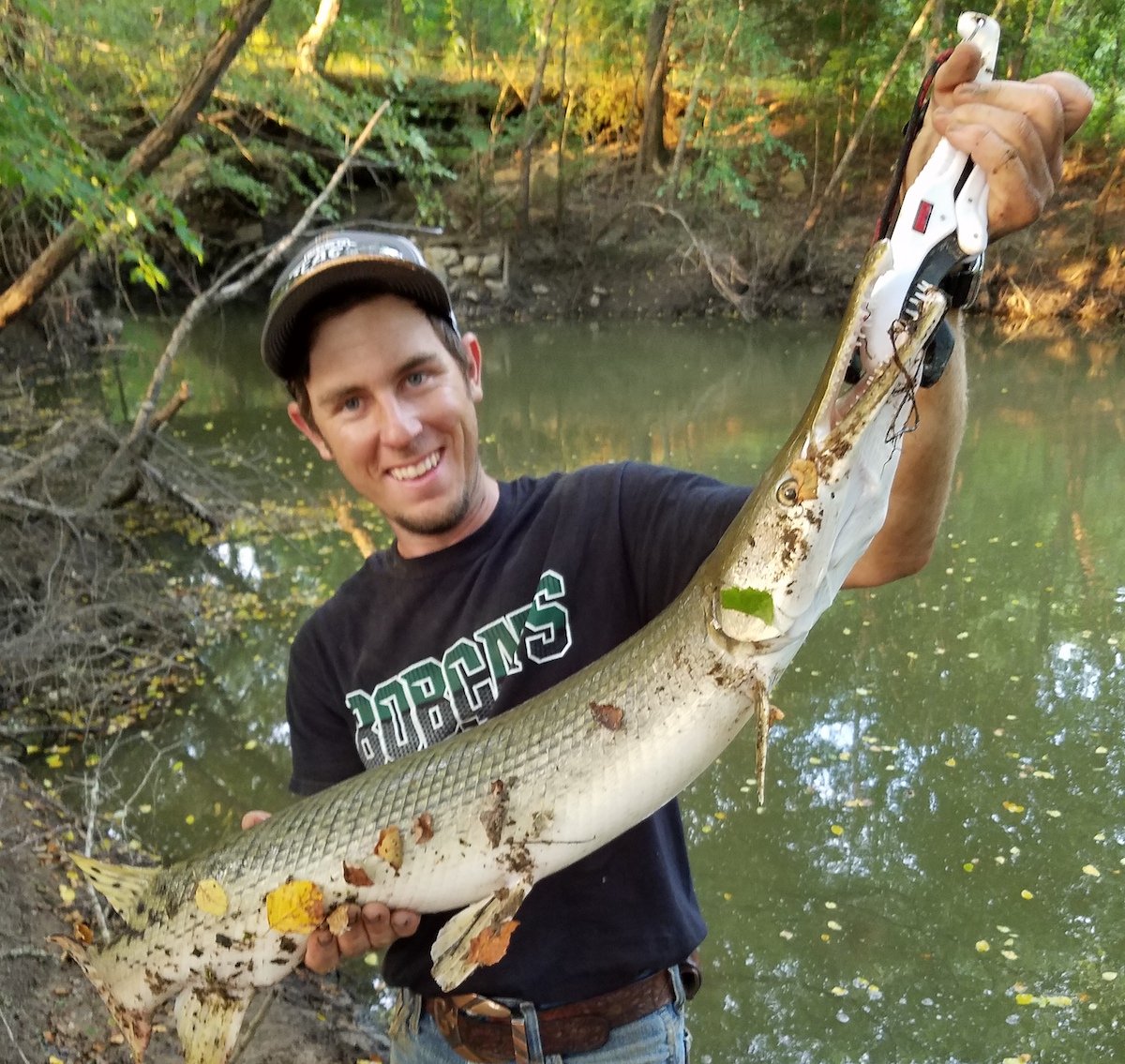 How to Handle Fish with Sharp Teeth

Handling fish with teeth or sharp gill covers can be tricky for people who don't have much experience. Common species with sharp teeth include muskie, northern pike, walleye, and Gar. Here in Texas, you are most likely to be faced with handling a gar, but I'll explain how to handle them all. The easiest and safest way to handle a fish with a mouth full of teeth is with a lip-gripping tool (See Above). Tools such as this make it easy to maintain control without your hand having to be near their mouth.

In most cases, I, like many others, do not carry such a tool in my boat. Instead, I have to handle the fish with my hands. In my opinion, walleye are the easiest to handle because they tend not to thrash around so much once in the net. You can usually slide your hand underneath their head and grab onto the skin where the gill flaps meet the head (Figure 5). It is critical to not hold them by the gill cover (operculum) as it will rip and severely injure the fish. This same approach can be taken for pike and muskie as well. In my opinion, Gar is the most difficult to hold onto and longnose Gar, in particular, often have a very narrow head, which makes it difficult to get a grip on anything. Plus, Gar's teeth protrude on the outside edge of their mouth, which means they can cut you just by hitting you with the side of their head. When handling Gar, I suggest holding them very similar to how you'd handle a larger catfish, with one hand behind their pectoral fins and the other grabbing the tail anterior to the caudal fin (Figure 6).

Hopefully, these tips on handling different fish species will help prevent injury to both you and your catch. Like so many things, practice will make perfect, so practice the methods which you find most comfortable, and in no time, you'll be handling fish like a pro. Enjoy your time out on the water!

Stocking a Fishery with Shad